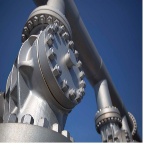 An atmospheric pressure reservoir of a maximum storage capacity of 32,000 m3 fed by small and medium-sized liquefied gas tankers (maximum 30,000 m3), which will ensure distribution via tank trunks and lighters. These are the main features of the small-scale LNG project in the Port of Marghera undertaken by Venice LNG, a new company established by the end of last year by Decal (65%) and San Marco Gas (35%).
The depot, to be filled by around 50 liquefied gas tankers a year, will be built next to the existing oil storage site along the Southern Industrial Channel, on the reclaimed land previously used for handling of cement.
The project, officially presented on Wednesday, provides for an overall investment of more than 100 million euros. Its aim is to favor the use of LNG as alternative fuel for heavy and marine vehicles at one of the Italian ports identified by Gainn_IT, an initiative of the Ministry of Infrastructure to promote diffusion of LNG for transportation.
Venice LNG is also part of the Gainn4Sea action presented in the framework of the financing programme 2017 CEF Transport Blending Map General. By the end of 2017, the project was declared eligible for co-financing.