France, in 2018 twice as much renewable gas in the network 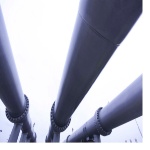 The year 2018 confirmed the upward trend of the French biomethane production and distribution chain, with 32 new plants entering into service owing to which the total number of injection points across the national network of gas pipelines increased to 76. These are the findings of the fourth edition of the “Panorama du Gaz Renouvelable” published on Thursday by GRTgaz, Teréga and GRDF, the associations of renewable energy SER and local public gas companies SPEGNN.
Based on the report, last year 714 GWh of biomethane were put into the French network which was twice as much as in 2017, in respect of an annual installed capacity of 1,206 GWh by the end of 2018, vs. 682 GWh a year ago.
Also the number of plants that applied for connection to the network doubled, as by the end of the year they reached 661 for a total capacity of 14 TWh per year.
GRTgaz, Teréga, GRDF, SER and SPEGNN underline in the report that the biomethane chain offers numerous advantages, among others, the local use of waste, decarbonization in the sectors of energy and agriculture, the return of digest to the soil as natural fertilizer, the creation of jobs at local level and the development of innovation.