Snam awards winning schools of 2nd edition of “Stories about the future�? 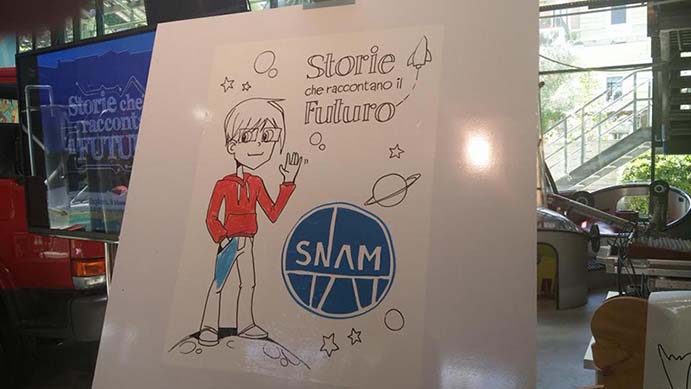 Snam awarded today the winning schools of “ Stories about the Future. The Network of Learning: science, knowledge… science-fiction!�? , the second edition of the project promoted by the Company in association with Federparchi-Europarc Italia, and endorsed by the Italian Ministry of the Environment.

The ceremony was held at Explora, the Children’s Museum of Rome, and attended by school directors, teachers and pupils from the winning classes, Federparchi and Snam. The event was presented by Licia Colò, who anchors several TV programmes about nature and environment, with live illustrations by cartoonist Neva, specialized in scribing. Meanwhile, kids took part in several laboratories and practical activities.

The project, aimed at 3rd, 4th and 5th year primary school classes, saw the participation of almost 400 schools all around Italy and in Paris and London (Lazio, Lombardy and Campania Regions had the largest participation, with 60, 54 and 40 submitted works respectively).

Round 900 classes and 20,000 kids were involved and discovered the relationship between man and science, the proper use of natural resources and the contribution of technological evolution to sustainable development with the help of Snam’s learning kit.

The jury had a difficult time selecting the three best works among 450 submitted: this time, “IV Circolo Lorenzini�? of Caserta, “Ignazio Silone�? of Montesilvano (Pescara) and “Ugo Foscolo�? of Bucine (Arezzo) were awarded; besides the winning schools, 20 other institutes obtained a special mention for the high quality and creativity of the works.

Also this year, works received will be the basis for the realization of the tablets of Snam's artistic calendar 2016, that will be made by a famous Italian designer. Several Italian and international artists have collaborated over the years, among whom the photographers Ferdinando Scianna and Giorgia Florio, Steph Marshall and Silver, who designed last year’s calendar.