Snam and the school 2014 - Discovering the gas network

Snam and the school 2014 - Discovering the gas network

Silver and 300 Italian schools team up in Snam educational

Chosen among creations of more than 1000 classes that joined “Stories about the future” project, the best works have been awarded at the Botanical garden in Rome, and inspired Snam 2015 calendar, drawn by the creator of “Lupo Alberto”.

A unique event conceived to award the winning schools of the first edition of the educational project “Stories about the future”, to launch the upcoming 2015 edition and to preview the new Snam artistic calendar, drawn by Silver, “father” of “Lupo Alberto” (“Alberto the Wolf”), who designed 12 tables re-elaborating the most notable works sent by schools that joined the contest.

The contest attracted a wide participation: all 1871 works were notable and some were of outstanding quality. It was difficult to choose between all the compositions, but finally the panel selected the three winners of the interactive whiteboard. The commission awarded also 10 special mentions for the «class’ efforts and involvement».
Ten schools received the special mention: Andrea Palladio and Giacomo Zanella of Asigliano Veneto (Vicenza), Leonardo Da Vinci of Marconi di Senago (Milano), Margherita di Savoia of Torino, Salvo D’Acquisto of Camerino (Macerata), Circolo Didattico of Pontenure Roveleto di Cadeo (Piacenza), Odoardo Golfarelli of Montefiascone (Viterbo), Pietro Romualdo Pirotta of Roma, Sacra Famiglia of Roma, Capitano Polizzi of Partinico (Palermo).

An educational project that looks at the subject of biodiversity and analyses its importance and the need to protect and respect it for the wellbeing of the planet: this is the idea behind “ Stories about the Future. Discovering the Network”, Snam’s 2014 schools project.

Organised in conjunction with Italy’s Federparchi-Europarc (the Italian federation of parks and nature reserves) and sponsored by the Ministry for the Environment, Land and Sea, the project sets out to consolidate awareness of how Snam operates with the utmost regard for the environment and the local area, and to engage new stakeholders.

The project is aimed at 3rd, 4th and 5th grade primary school pupils and involves an interdisciplinary approach that promotes in-depth knowledge of sustainability-related issues, optimising the educational relationship and contact between teachers, pupils and families. In addition to schools all over Italy, the scheme also involves schools from other countries, particularly Austria (Baumgarten), Belgium (Brussels), France (Bordeaux and Pau) and England (Norwich and Bacton), in six cities in which Snam has specific interests with regard to its activities.

One thousand classes in Italy and Europe have joined the project for the 2013-2014 academic year. Each of them has been provided with a course pack which has been translated into the relevant language and is also available on this page. The material contained in the pack acts as a support for teachers during class work and facilitates the learning process for pupils. It includes:

The “Stories about the Future” project also involves an art competition, which aims to encourage children to represent the subject of biodiversity in their own creative way, and pupils will take inspiration from one of the six Bio-stories in the creation of a class picture.

The pictures will be examined by a special committee and the three classes with the best work will win an interactive whiteboard. All of the entries may also be used by an artist as inspiration for Snam’s 2015 calendar. 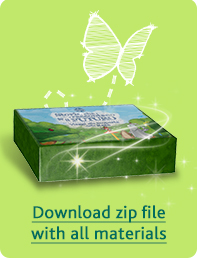