Snam and the School 2015 - The Network of Learning

The instinct to provide innovative solutions that did not exist before and pushes further our knowledge of the facts.

you can think of her as a huge tree that never tires of producing fruit; she is an invaluable heritage

it is that force that allows you to do anything. It helps you to run, play, talk, jump and to do your homework.

The award ceremony at the Museo per i bambini di Roma – Explora (Museum for children of Rome) ended the second edition of "Stories about the future. The Network of Learning: science, knowldedge.. science fiction! ", organized by Snam, endorsed by the Italian Ministry of Environment and in association with Federparchi-Europarc Italia. The "IV Circolo Lorenzini" school of Caserta won the challenge, followed by Ignazio Silone Montesilvano (Pescara) and Ugo Foscolo of Bucine (Arezzo) schools. The winner is awarded with whiteboard LIM, while the second and third place respectively will receive a Microscope with Tablet and a Laboratory Physics Kit.

The project "entered" in about 400 schools - involving around 900 classes and nearly 20 thousand students from all over Italy - and has gone beyond national borders, bringing the kit to Southfields Primary School of Peterborough (United Kingdom) and institute Leonardo da Vinci of Paris (France).

Science is the key theme of the second edition of the “Stories about the future” project promoted by Snam in association with Federparchi-Europarc Italia, and endorsed by the Italian Ministry of the Environment. The programme is aimed at 3rd, 4th and 5th year primary school classes.
“The Network of Learning: science, knowledge… science-fiction!” is the title of the project dedicated to the relationship between man and science, to the proper use of natural resources and to the contribution of the technological evolution to sustainable development.
Equipped with an Astro Exercise Book and accompanied by the friendly characters Tube-Arthur, Red the Robin and Eu-Genius, the pupils will carry out scientific experiments, listen to stories and create games, exploring all of the content in a fun way. The formula, already tried and tested by over a thousand classes in 2014, fosters creative expression and stimulates the imagination.

The learning kit available to teachers and pupils (downloadable also from this page) contains:

For the second year running, the learning project will be accompanied by a competition designed to encourage the children to produce their own personal and creative representation of the themes in question: each class will create an artistic project based on the things they have learned in class. The projects will be examined by a special panel of judges which will pick the three winners and announce twenty highly commended entries. The winning class will receive an Interactive Whiteboard (IWB), the second-place class a Microscope with Tablet, and the third-place class a Laboratory Physics Kit.

Stories about the schools 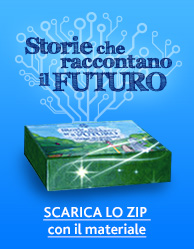