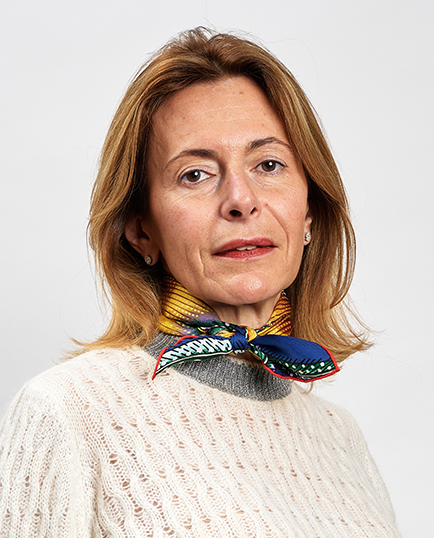 She has gained significant managerial experience in the private, public participated and Public Administration sectors, dealing for over twenty years with regulated and non-regulated business.

She graduated in Languages ​​and Contemporary History, with a specialization in Social Sciences from the Catholic University of the Sacred Heart of Milan, and began her career as a professional journalist of politics and economics with the Economic World, Fininvest and Euronews.

In 1997 she entered the Public Administration, taking on the position of Spokesperson for the Municipality of Milan in the privatization phase of the main municipalized companies. In particular, she dealt with operations in the energy and transport sectors and the construction of related infrastructure. During this time, she also participated in the urban and environmental redevelopment projects of the Territorial Framework Plan, "Reconstructing Greater Milan".

In the Municipality, during the net economy, she supervised the establishment of the joint venture for the creation of the first national telecommunications network entirely based on the IP protocol between the multi-utility AEM - now A2A - and e.Biscom and the subsequent listing. In 2001 she was appointed to Head of the e.Biscom Press Office and shortly thereafter she was also given responsibility for the External Relations of the subsidiary Fastweb, for the promotion of broadband services in the main metropolitan and production areas in Italy and Germany, through HanseNet Telekommunikation, and for the subsequent evolution of the regulatory framework.

In 2004, during the renewal phase of the main motorway and airport concessions, she was appointed as Autogrill’s External Relations Director, where she followed the development and diversification of the business in Italy and abroad both in the award processes and in the M&A operations in the sector of food and travel retail & duty free in Spain and the United Kingdom. Among the positions held, she supervised relations with management companies and their licensors, management of the impact of changes in market shares deriving from regulatory changes, diversification of the brand portfolio, owned and licensed. She also participated in the Group's first bio-architecture, eco-design and energy saving projects.

At the end of 2009 she joined Snam, where she was the first woman to join the leadership team, holding positions of increasing responsibility. Among others, she also developed the Snam Foundation project, created in 2017 to support business activities with a social growth engine for communities and the country, initially holding the role of General Manager and then being appointed, in 2019, to Board member.

She is a board member of Terèga Holding, a French regulated gas utility, of Tiscali and of the MIP - Polytechnic of Milan’s School of Management - and was member of the Boards of Directors of Fiera Milano, Toscana Energia and the publishing company Il Cittadino. She is also a member of the Assolombarda General Council and of the Executive Council of Valore D. She was President of the Federation of Italian Public Relations (FERPI) from 2011 to 2016.

She holds teaching positions at the Department of Business and Management of the LUISS Guido Carli University of Rome and in the Masters in Business Communication at the Catholic University of Milan.