Regasification units: what is Snam's role?

In addition, to foster greater security and diversification of Italy's energy supplies, Snam recently purchased a floating unit (FSRU) called Golar Tundra, with a storage capacity of 170,000 cubic metres and an annual regasification capacity of 5 billion cubic metres of gas. The terminal will be located in central-northern Italy, close to the areas where gas consumption is greater, in order to ensure the maximisation of its regasification capacity.

As part of a new energy plan for Sardinia included in the Decree of the President of the Council of Ministers (DPCM) of 29 March 2022, Snam purchased in recent months a FSRU (Golar Arctic) with a storage capacity of 140,000 cubic metres of gas, which will be installed near the port area of Portovesme (in the province of Cagliari).

Moreover, Snam and BW LNG have signed an agreement for the acquisition by Snam Group of 100% of the share capital of FSRU I Limited, which upon closing will own the floating storage and regasification unit (FSRU) "BW Singapore" as its sole asset. BW Singapore, built in 2015, has a maximum storage capacity of about 170,000 cubic metres of LNG (liquefied natural gas) and a nominal continuous regasification capacity of about 5 billion cubic metres per year. The unit has been deployed from the outset as an FSRU but can also operate as a carrier for the transport of LNG and it is expected to be installed in the upper Adriatic Sea, close to the coast of Ravenna.

What are floating storage and regasification units (FSRUs)?

FSRUs (Floating Storage and Regasification Units) are terminals capable of storing and regasifying natural gas. They are mounted on ships located in the vicinity of a port area, on the quayside or offshore, and receive liquefied natural gas (LNG) at a temperature of -160°C from other LNG carriers and regasify it (i.e. bring it to a gaseous state) in order to feed it into the national gas transmission network.

There are 48 FSRUs currently in operation worldwide, 25 of which have an LNG storage capacity of between 160,000 and 180,000 cubic metres (source: Shipbroker).

What is liquefied natural gas (LNG) used for?

Natural gas can be imported in a gaseous state, through the methane pipeline network, or in a liquid state (LNG) via LNG carriers. These ships receive liquid gas from gas liquefaction plants located in exporting countries and bring it to regasification plants in importing countries. Liquefied natural gas has a volume about 600 times smaller than in its gaseous state.

Liquefied natural gas is a global source that guarantees greater energy independence. The world market is approaching 500 billion cubic metres of LNG marketed annually, which is more than the demand for the whole of Europe. Thanks to the contribution of the new regasification units, liquefied natural gas will cover about one third of Italy's annual demand.

How does the regasification process work?

Once it has come close to an FSRU, a ship carrying LNG at a temperature of -160° C transfers liquid gas into the terminal's tanks. The transfer takes place via steel discharge arms installed on the FSRU. The arms extend and engage with the flanges of the LNG carrier. The liquid gas is then transfered into the unit’s tanks and stored.

Later, depending on market needs, the liquid gas is regasified. The regasification process is achieved by introducing methane in its liquid state into a heat exchanger through which a warmer liquid flows, usually seawater, whose natural temperature is sufficient to return the gas to its gaseous state. LNG and seawater exchange energy (LNG gives off cold, seawater gives off heat), although they never come into contact with each other.

The heat exchanger consists of a steel coil (in which LNG flows) immersed in a tank containing water at room temperature, which is continuously recirculated to prevent it from cooling. The temperature at which the water is poured back into the sea is constantly monitored and must be within the authorised limits.

The room-temperature gas obtained from the regasification process is then compressed and fed into a pipeline from the FSRU to the national transport network. 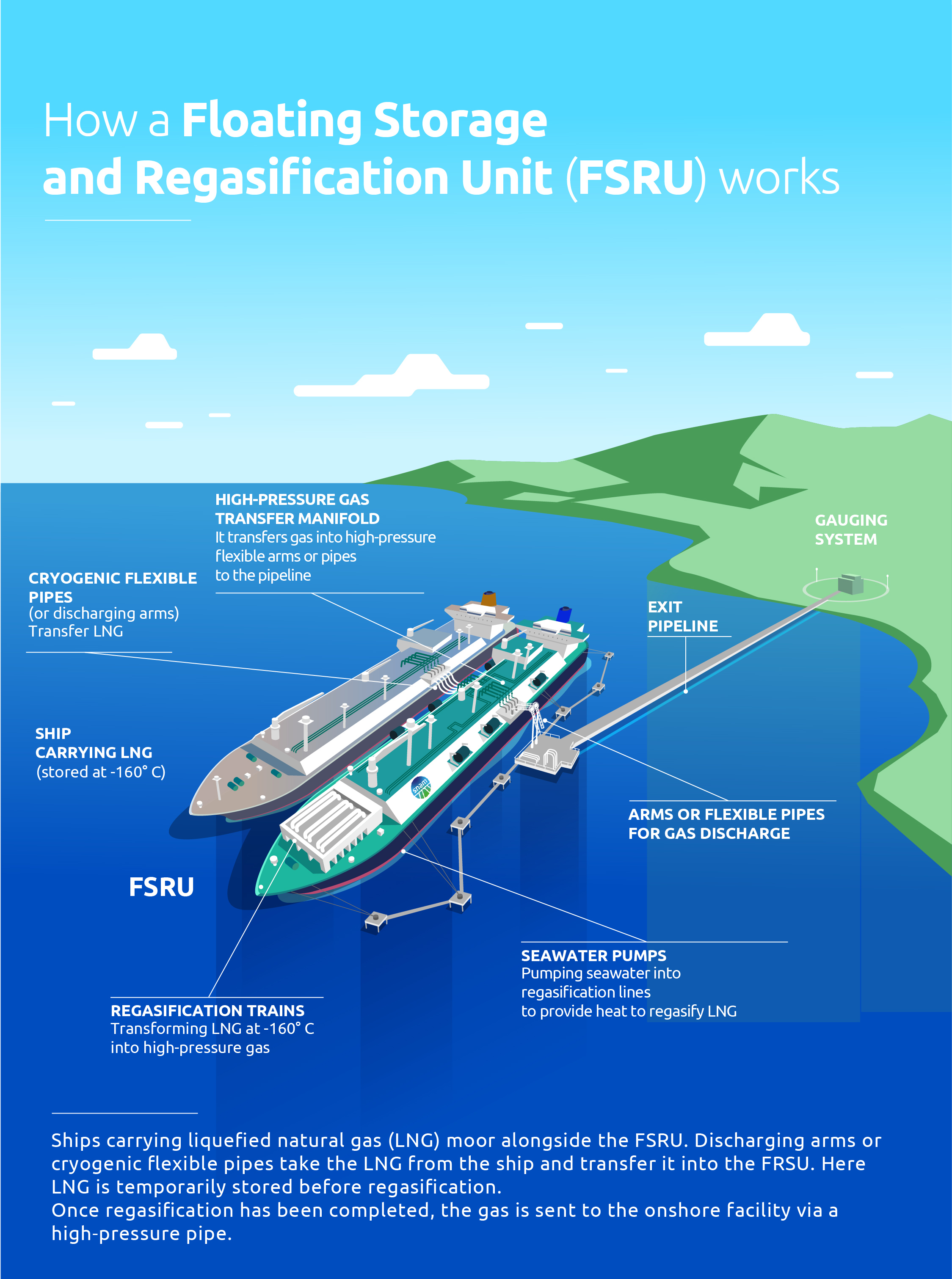 What impact do FSRUs have on port activity?

Floating regasification units are managed so as not to disrupt the normal economic and tourist activity of the ports involved. On average, depending on market conditions, the frequency of arrival of LNG carriers is about one per week. Anchoring, mooring and unmooring operations last approximately two hours each and are carried out in accordance with the provisions of the maritime authorities in order to minimise any possible interference. In terms of safety, the studies carried out also show the compatibility of FSRUs with other port activities.

Hundreds of regasification plants, including onshore terminals and FSRUs, are safely operating in the world today. They are a well-known, safe and environmentally-friendly infrastructure. Unlike fixed terminals, floating regasification units take much less time to install and can eventually be relocated where there is a greater need for decarbonisation or energy security. Regasification ships are equipped with advanced leak detection instruments and emergency systems.

FSRUs are relatively simple plants focusing on the regasification of a liquid gas, and involve no specific type of combustion or chemical reactions. They are, however, subject to the strictest prevention and security measures, as a further guarantee for the people and regions concerned, in accordance with the relevant national legislation.

Like all fuels, natural gas must be handled with care, as Snam has been doing every day for years whilst managing its infrastructure.