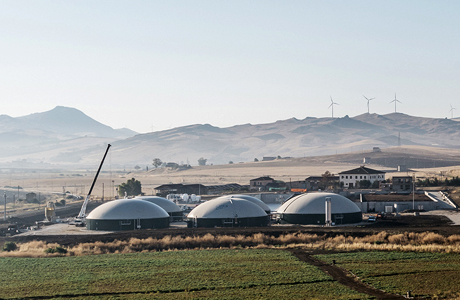 Biomethane, a renewable and programmable source of energy, can answer to emission reduction goals by exploiting existing gas networks and contributing to increasing domestic methane production.

Biomethane can answer to emission reduction goals by exploiting existing gas networks and contributing to increasing domestic methane production. This perspective would also have a positive impact on the agri-food sector by promoting an economic model based on sustainability and resource-friendliness.

The contribution of biomethane to the decarbonisation objectives is not limited to the energy consumption phase only. Its production process can help to significantly reduce emissions in the farming sector (14% of climate changing gases) and restore organic matter to the soil. In fact, the digested material (what remains after the anaerobic digestion of the agricultural matrices) is an excellent natural fertilizer. Farms could therefore substantially reduce their production costs and increase their competitiveness. In addition, biomethane produced with sustainability criteria can increase the ability to absorb and preserve soil carbon.

Methods of incentivation of the biomethane introduced into the natural gas network have been foreseen for the first time with the Directive 2009/28 / EC and implemented in accordance with Article 21 of Legislative Decree 3 March 2011, n.28. In implementation of this decree, the Ministry of Economic Development together with the Minister of Environment and Protection of the Sea and with the Minister of Agricultural and Forestry Policies has adopted specific modalities for the incentive of biomethane in 2013 (Ministerial Decree 5 December 2013).

Following the entry into force of this decree, considering it opportune to further promote the use of biomethane both as fuel for transport and as an important element for the security of gas supplies and favoring in particular that produced by advanced matrices, the Ministry of Economic Development has deemed it useful to issue a new decree, DM March 2, 2018, for the promotion of biomethane (also advanced) in order to incentivize the intake of biomethane in the natural gas network and destined for transport use also through the reconversion of existing biogas and its use for the production of biofuels released for consumption in the transport sector.

Do you want to know how to connect your biomethane production plant to our network?