She was born in Treviso in 1964.
As of 2 April 2019, she is a Director of Snam.
Graduated in sociology with honours.
She has over twenty years of managerial experience in the Alitalia group, holding roles of increasing responsibility, including in operational positions with 3,000-5,000 employees; she also directed the airline Air One from 2012 to 2014, bringing it back into balance.
She has acquired specific expertise in restructuring, mergers, acquisitions and receiverships, and is particularly sensitive to the management of human capital and the many dimensions involved in any corporate change.
She deals with corporate governance, with a specific focus on ESG issues and on the different ways, including the impacts of climate change, of substantiating an approach aimed at sustainable development over time. She follows the B Corp movement and its paradigm of sustainable business, capable of developing profits together with a positive impact on society and the environment. She analyses methodologies and tools to identify and monitor ESG risks in an integrated manner, mapping their evolutionary dynamics and interconnections with other factors capable of triggering their possible impacts, paying particular attention to the environmental dimension, for aspects related to climate change, and to the social dimension, related to inequalities.

She supports gender equality, the development of female talent and merit-based careers, believing in the need for women to be fully integrated into all spheres of society and deservedly present in top positions.
She is in the boards of directors of the ESG European Institute and Fuori Quota, non-profit organizations active respectively on sustainability and women's empowerment and collaborates in ASviS on the Gender Equality goal of the UN 2030 Agenda.
Since 2018 she is Independent Director of Italian Wireless Infrastructures, for which she is also the Chairwomen of the Sustainability Committee and member of the Nomination and Remuneration Committee. 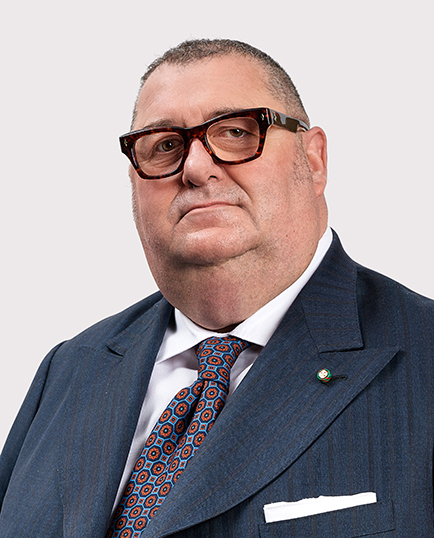 He is currently a Full Professor of Corporate Organisation at the University of Bologna and Dean of the Bologna Business School. He is a non-executive Director on the Board of Directors of Ferrarelle S.p.A. and EFMD.

He works in the field of organisational identity and is the author of several essays and publications in international scientific reviews.

He was a Member of the Committee for Natural Capital (Ministry of the Environment and Land and Sea Protection); Economic Director of the Ministry for Regional Affairs, Tourism and Sport; Coordinator of the White Paper on Innovation and Entrepreneurship and Advisor to the Ministry of the Defence.

He has carried out and continues to carry out activities to support research, innovation and entrepreneurship and since 2013 he has been a Senior Advisor of Fondazione MAST.

He is an Honorary Professor at Nankai University and Mirbis and was awarded the honorary title of Knight and Commander of the Order of Merit of the Italian Republic. 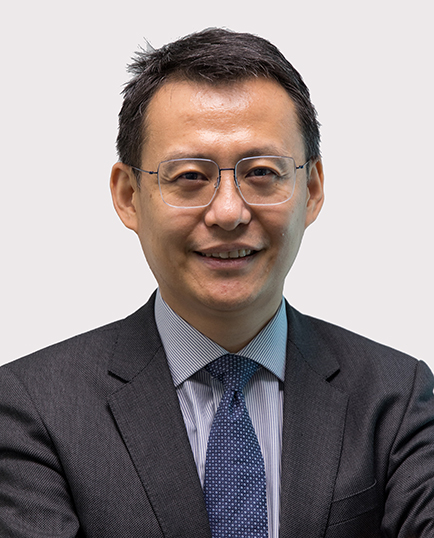 Bachelor Degree and Master’s Degree in Electrical Power System and its Engineering from Zhejiang University, China.

Currently he holds the office of Board member of CDP RETI S.p.A., Italgas S.p.A., Terna S.p.A. and State Grid‘s Chief Representative in Italy.

He has held the position of Deputy Director of Department of Business Development&Strategy, State Grid lnternational Development , LTD from 2013 to 2016. As Project Manager and Key Contact of CDP Reti transaction (2.2 billion Euro) in 2014. Highly evolved in several Australia M&A transactions at that period for State Grid.

He has held the position of Project Manager of Department of Business Development&Strategy, State Grid International Development , LTD from 2008 to 2013. As Project Manager acquired 7 transmission Concessions in Brazil from Spain investors (1 billion USD) in 2010. Participating in the transaction of NGCP of Philippines (2009), REN of Portugal (2011).

He has held the position of Dispatching Engineer of Dispatching Communication Center, Zhejiang Electric Power Company (a subsidiary of State Grid Corporation of China) (2003-2008). 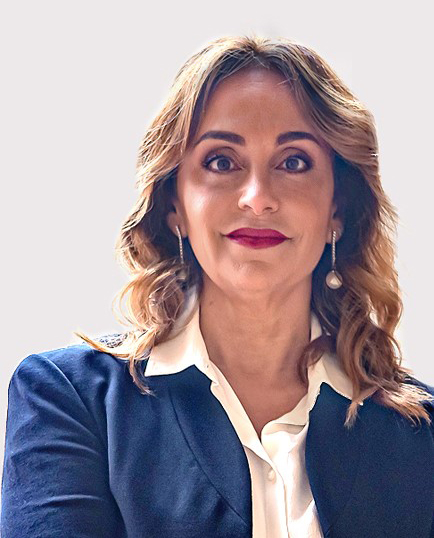 Independent Director and Chairman of the Committee for Internal Control and Risk and Sustainability and member of the Related Parties Committee of Trevifin S.p.A. and Effective Auditor of Sogefi S.p.A.

Lastly, the research scope of her publications is also geared towards providing answers to climate change issues in the legal sector.

The Committee shall conduct preliminary investigations for the Board of Directors and provide it with advice and recommendations in order to promote the continuous integration of national and international best practices into the corporate governance of Snam, and environmental, social and governance matters into the company’s strategies, so as to pursue sustainable success, which takes the form of long-term value creation to benefit shareholders, taking into account the interests of other stakeholders relevant for the company. The committee, in particular, shall have the following functions:

The Committee reports to the Board, at least once every six months and no later than the latest date for the approval of the annual and six-monthly financial report, on the activities it has carried out, at the meeting specified by the Chairman of the Board of Directors; in any event, after each meeting the Committee Chairman informs the Board of Directors, at the first available meeting, about the activities carried out and the comments, recommendations and opinions put forward by the Committee.

Regulations of the Environmental, Social and Governance Committee

Number of meetings of the Environmental, Social & Governance* Committee and rate of attendance (2021)

Rate of attendance at meetings 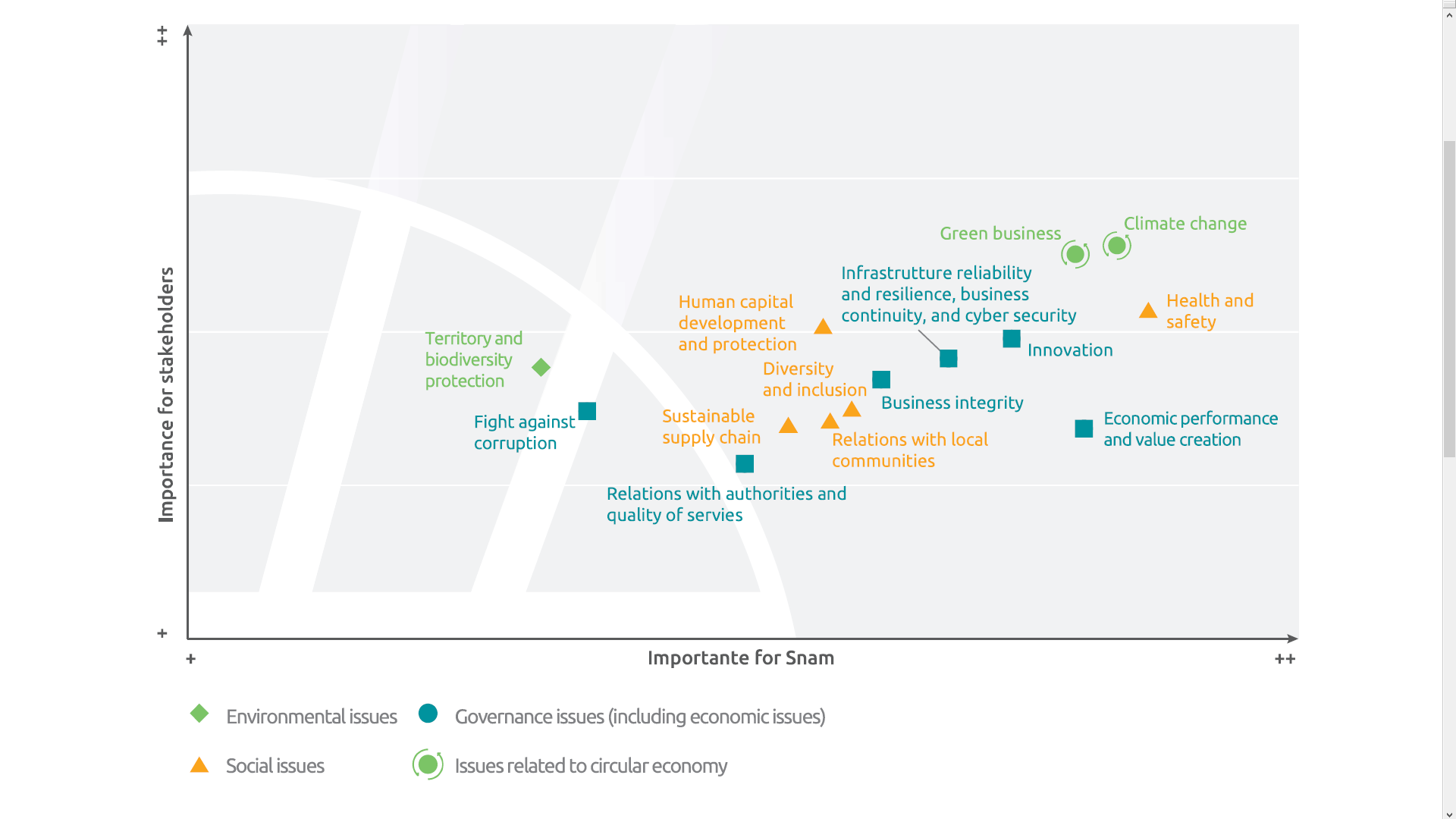 Find out about our Sustainability

Go to our strategy and commitments